How Does DDS Compare to other IoT Technologies?

Applications designed for the Consumer Internet of Things (IoT) and the Industrial IoT must be able to efficiently scale and securely share data. However, there are qualitative differences in system requirements for these two types of IoT applications: 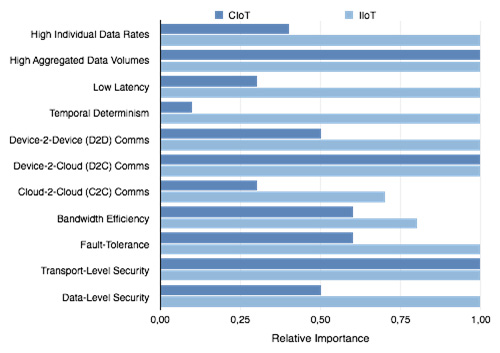 The following table provides a comparison of the technologies listed above. A number of these IoT protocols were designed for simplicity and as such can support only a very limited set of use cases.  DDS on the other hand is a feature-rich standard that transparently handles much of an IoT system’s data connectivity complexity, therefore, easing developer efforts.

Many real systems include devices, servers, mobile nodes, and more. They have diverse communication needs, but it’s better – and easier – to use a single communication paradigm when possible. System designers should determine which of the protocols meets the primary challenge of their intended applications. Then, if possible, extend that primary choice to all aspects of the system.

Overall, DDS is the most versatile of these protocols. It can manage tiny devices, connect large, high-performance sensor networks and close time-critical control loops. It can also serve and receive data from the cloud.